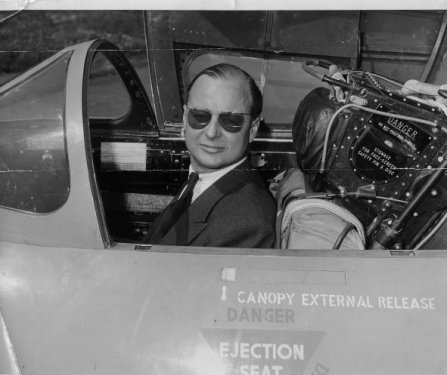 My father said at the time "It was a large aircraft and was, of course, unlike anything of its size which had flown before. From the start, the Vulcan was laid out with a view to simple operation, both on the ground and in the air. The cockpit was arranged in such a way that the complexity necessary in a modern aircraft was reduced as much as possible. For this reason, there did not appear to be any necessity for a crew of more than one in the early flights."

A Wikipedia entry on Roly can be found here

Roly has some fame for rolling the Avro Vulcan at the Farnborough airshow in 1955.

Roly in one of the Avro 707's, which were small scale research aircraft to test the design concept of the Avro Vulcan 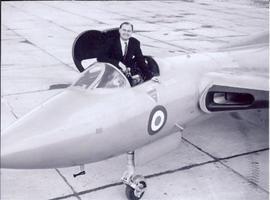 Avro Vulcans at Woodford, Cheshire in 1990. On the left is XH558 (celebrating its 30th birthday when this photo was taken) which was the last flying Vulcan and on the right XM603. Photo by Cliff Knox

XH558 after being returned to flight after major restoration has now flown its last flight. All details can be found on the Vulcan to the Sky site here.

XM603 is still at Woodford and has been incorporated into a new Avro Heritage centre at Woodford. I highly recommend a visit.

A fantastic site by Damian Burke that has a wealth of information and pictures about the Vulcan can be found here.

Damian's site has many other aircraft listed and significantly has taken over the hosting of the Test Flying Memorial pages. This lists all the fatalities from test flying in Britain from 1910. You can find entries, to our loss, for my Grandfather "Bill Thorn" and my mother's first husband "David Hanson"